Home ANDROID Galaxy A6 and A6+ launched in the UAE
Facebook
Twitter
Pinterest
WhatsApp
After a flurry of leaks and rumors, Samsung officially announced the Galaxy A6 and A6+ earlier this month. Evident from their A series branding, these are midrange smartphones from Samsung and they slot in below the Galaxy A8/A8+ (2018) in terms of what they are bringing to the table. 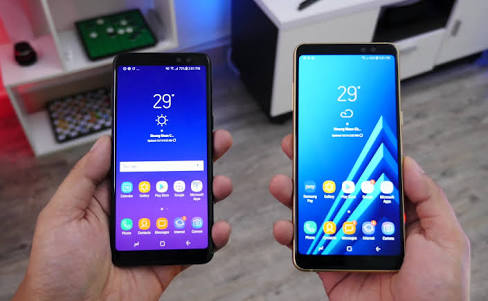 Since the official announcement, Samsung has been gradually launching the new models in various markets around the world. Yesterday, the company launched these devices in India along with the Galaxy J6 and J8. Now, the new A series devices are made available for buyers in the UAE as well. Both the models are listed on Samsung’s regional website and are available for purchase online and offline through the company’s retail partners.

Additional features of Samsung Galaxy A6 Plus:

Available in Black, Blue, and Gold color options, the devices are priced at AED 1,249 ($340) for the Galaxy A6 and AED 1,449 ($395) for the Galaxy A6. As to be expected, they cost less than the Galaxy A8 and A8+ which currently retails for AED 1,679 ($457) and AED 1,967 ($535) respectively on Samsung’s website.
Of course, the lower pricing is also reflected in the specifications of the Galaxy A6 duo. While the Galaxy A6 and A6+ are equipped with an Infinity Display, they are powered by the less powerful EXYNOS 7880 and Snapdragon 450 chipsets respectively, compared to the EXYNOS 7885Octa SoC found in the Galaxy A8/A8+ (2018). You can check the complete specifications of the Galaxy A6/A6+ and comparison with the Galaxy A8/A8+ here and here
“Here in the UAE, consumers are always looking for more from their smartphones. They are quick to adopt the best technology on the market, and we take pride in being able to consistently bring them the advanced devices they’ve come to expect,” said Tarek Sabbagh, Head of IT and Mobile (IM) Division at Samsung Electronics Gulf.
There is a choice of Black, Gold, Blue and Lavender colour options in the phone.
Fingerprint (rear-mounted), accelerometer, gyro, proximity and compass are the sensors on the phone.The Samsung Galaxy A6 Plus Super features AMOLED capacitive touchscreen with an option of 16 million colors.