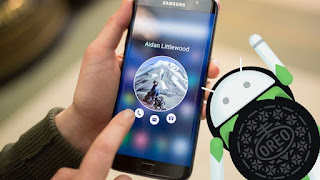 This is likely a phased rollout so Oreo for Galaxy S7 and Galaxy S7 edge will certainly not be rolled out in all markets simultaneously. The timeframe that Samsung had recently provided called for a wider release by mid-May so we can expect the update to go live in additional markets over the next couple of weeks.


In this chase i was using the exynos 8890 variant and my device was got successfully updated. and i added a screenshot for my device in below. 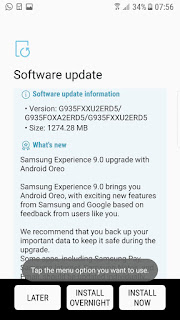 Samsung is now rolling out firmware version G930FXXU2ERD5 and G935FXXU2ERD5 for the Galaxy S7 and Galaxy S7 edge respectively in the United Kingdom. The firmware is only available over-the-air right now and can’t be downloaded through SmartSwitch.
All of the new features that are part and parcel of Android 8.0 Oreo are included in this release. Check out our detailed What’s New With Android 8.0 Oreo series to find out more about all of the new features and improvements that this update brings. The firmware update also comes with the April security patch.
Galaxy S7 and Galaxy S7 edge owners in the United Kingdom should now keep an eye out for an over-the-air update notification as it will be landing on their devices soon. They can also try manually pulling the update by going to the Software updatemenu in the Settings app. The update won’t be immediately available for carrier-branded units, though.
The ball is now rolling on Oreo for Galaxy S7 and Galaxy S7 edge so users across the globe can rest assured that they will receive a taste of Oreo sooner rather than later. We’ll surely let you know as soon as the firmware is rolled out in more markets.