Home Histories Macintosh by Apple – Complete History of Mac Computers
WhatsApp
Facebook
Twitter
Telegram
Email
The Macintosh, or Mac, is a series of several lines of personal computers, manufactured by Apple Inc. The first Macintosh was introduced on January 24, 1984, by Steve Jobs (see the lower photo) and it was the first commercially successful personal computer to feature two old known then, but still unpopular features the mouse and the graphical user interface, rather than the command-line interface of its predecessors. 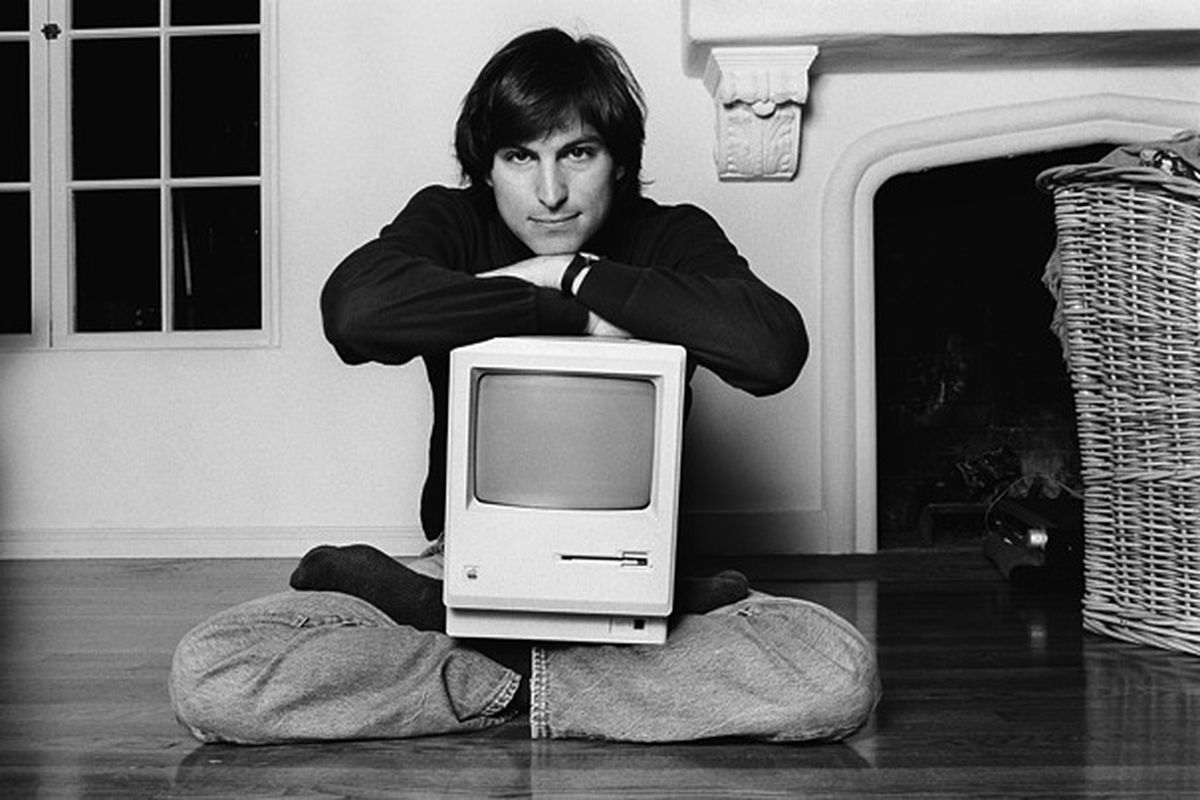 Production of the Mac is based on a vertical integration model in that Apple facilitates all aspects of its hardware and creates its own operating system (called System Software, later renamed to Mac OS, see the lower image) that is pre-installed on all Mac computers. This is in contrast to most IBM PC compatibles, where multiple sellers create hardware intended to run another company’s operating software. Apple exclusively produces Mac hardware, choosing internal systems, designs, and prices. Apple also develops the operating system for the Mac, currently Mac OS X version 10.6 “Snow Leopard”. The modern Mac, like other personal computers, is capable of running alternative operating systems such as Linux, FreeBSD, and, in the case of Intel-based Macs, Microsoft Windows. However, Apple does not license Mac OS X for use on non-Apple computers. The Macintosh project started in the late 1970s with Jef Raskin (1943–2005) (see the nearby image), an Apple employee, who envisioned an easy-to-use, low-cost computer for the average consumer. He wanted to name the computer after his favorite type of apple, the McIntosh, but the name had to be changed for legal reasons. In September 1979, Raskin was authorized by the management to start hiring for the project, and he began to look for an engineer who could put together a prototype. Bill Atkinson, a member of Apple’s Lisa team (which was developing a similar but higher-end computer), introduced him to Burrell Smith, a service technician who had been hired earlier that year. Over the years, Raskin assembled a large development team that designed and built the original Macintosh hardware and software; besides Raskin, Atkinson and Smith, the team included Chris Espinosa, Joanna Hoffman, George Crow, Bruce Horn, Jerry Manock, Susan Kare, Andy Hertzfeld, and Daniel Kottke. 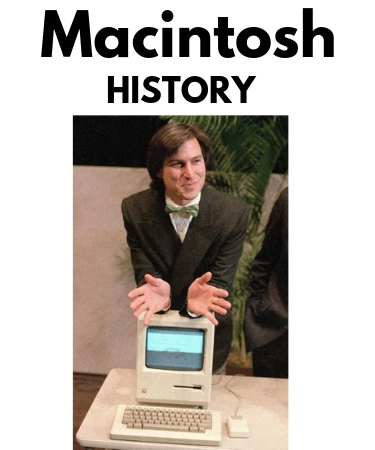 The first Macintosh board, designed by Burrell Smith, had 64 kilobytes (KB) of RAM, used the Motorola 6809E microprocessor, and was capable of supporting a 256×256 pixel black-and-white bitmap display. Bud Tribble, a Macintosh programmer, was interested in running the Lisa’s graphical programs on the Macintosh, and asked Smith whether he could incorporate the Lisa’s Motorola 68000 microprocessor into the Mac while still keeping the production cost down. By December 1980, Smith had succeeded in designing a board that not only used the 68000, but bumped its speed from 5 to 8 megahertz (MHz); this board also had the capacity to support a 384×256 pixel display.

Smith’s design used fewer RAM chips than the Lisa, which made production of the board significantly more cost-efficient. The final Mac design was self-contained and had the complete QuickDraw picture language and interpreter in 64 Kb of ROM and 128 KB of RAM. Though there were no memory slots, its RAM was expandable to 512 KB by means of soldering sixteen chip sockets to accept 256 Kb RAM chips in place of the factory-installed chips. The final product’s screen was a 9-inch, 512×342 pixel monochrome display, exceeding the prototypes. 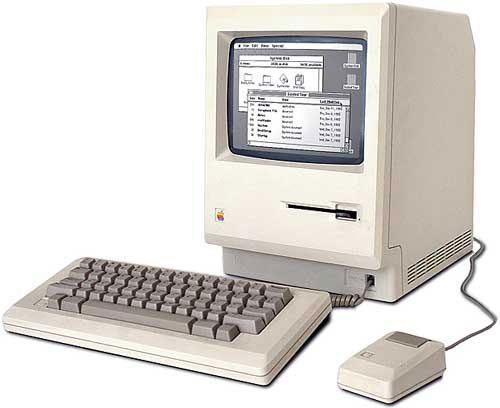 The design caught the attention of Steve Jobs, co-founder of Apple. Realizing that the Macintosh was more marketable than the Lisa, he began to focus his attention on the project. Raskin finally left the Macintosh project in 1981 over a personality conflict with Jobs, and the final Macintosh design is said to be closer to Jobs’ ideas than Raskin’s. After hearing of the pioneering GUI technology being developed at Xerox PARC, Jobs had negotiated a visit to see the Xerox Alto computer and Smalltalk development tools in exchange for Apple stock options. The Lisa and Macintosh user interfaces were partially influenced by technology seen at Xerox PARC and were combined with the Macintosh group’s own ideas. 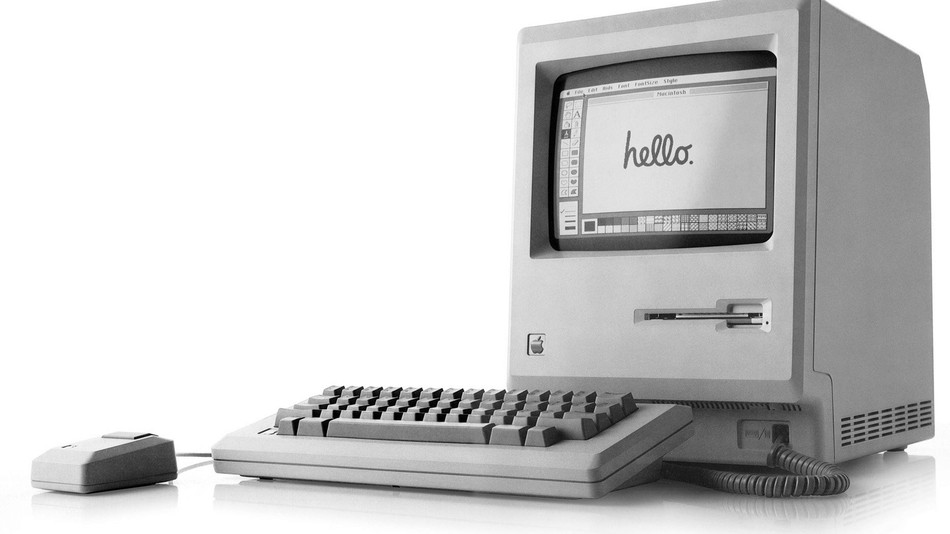 For a special post-election edition of Newsweek in November 1984, Apple spent more than $2.5 million to buy all 39 of the advertising pages in the issue. Apple also ran a “Test Drive a Macintosh” promotion, in which potential buyers with a credit card could take home a Macintosh for 24 hours and return it to a dealer afterwards. While 200000 people participated, dealers disliked the promotion, the supply of computers was insufficient for demand, and many were returned in such a bad shape that they could no longer be sold. This marketing campaign caused CEO John Sculley to raise the price from $1995 to $2495.

In 1985, the combination of the Mac, Apple’s LaserWriter printer, and Mac-specific software like Boston Software’s MacPublisherand Aldus PageMaker enabled users to design, preview, and print page layouts complete with text and graphics, it was an activity to become known as desktop publishing. Initially, desktop publishing was unique to the Macintosh, but eventually became available for IBM PC users as well. Later, applications such as Macromedia FreeHand, QuarkXPress, Adobe Photoshop, and Adobe Illustrator strengthened the Mac’s position as a graphics computer and helped to expand the emerging desktop publishing market. 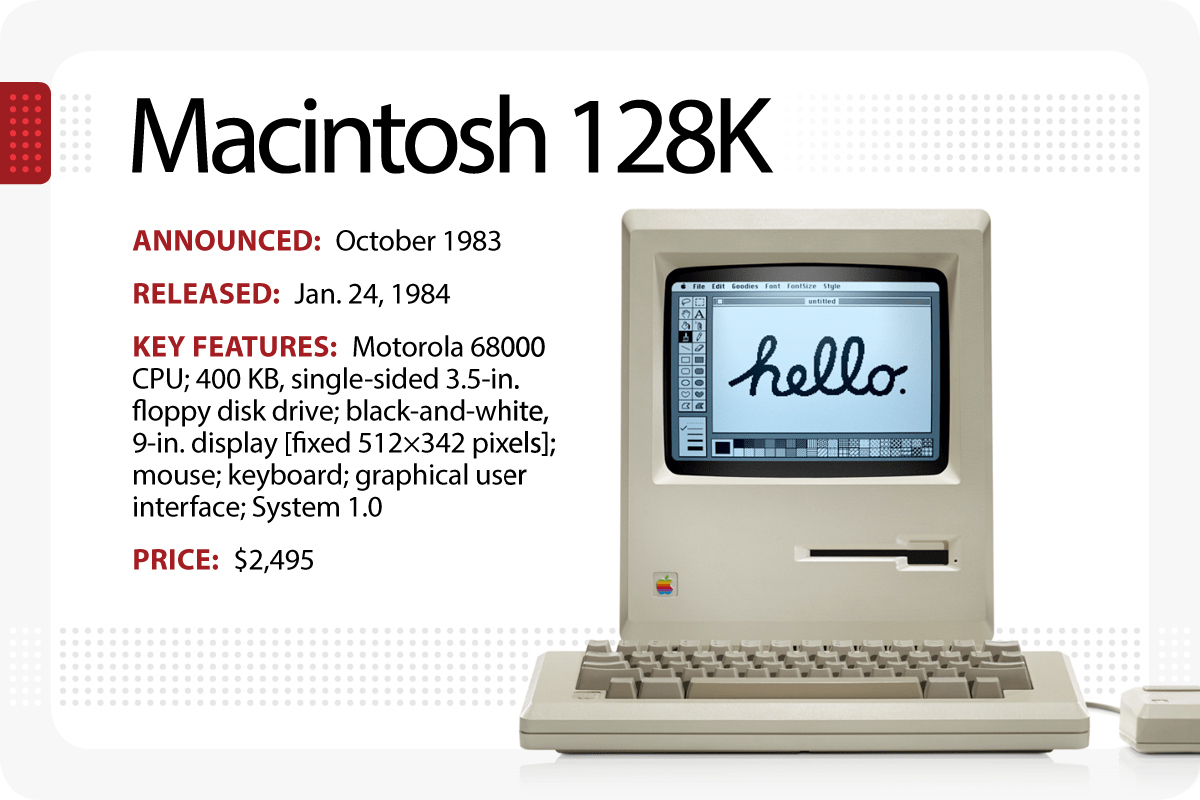 The limitations of the first Mac soon became clear: it had very little memory, even compared with other personal computers in 1984, and could not be expanded easily; and it lacked a hard disk drive or the means to attach one easily. In October 1985, Apple increased the Mac’s memory to 512 KB, but it was inconvenient and difficult to expand the memory of a 128 KB Mac. In an attempt to improve connectivity, Apple released the Macintosh Plus on January 10, 1986 for $2600. It offered one megabyte of RAM, expandable to four, and a then-revolutionary SCSI parallel interface, allowing up to seven peripherals—such as hard drives and scanners—to be attached to the machine. Its floppy drive was increased to an 800 KB capacity. The Mac Plus was an immediate success and remained in production, unchanged, until October 15, 1990; on sale for just over four years and ten months, it was the longest-lived Macintosh in Apple’s history.

At its introduction, the Macintosh was targeted for two primary markets: knowledge-workers and students. Referring to the telephone as the first desktop appliance, Steve Jobs hoped that the Macintosh would become the second desktop appliance. As Bill Gates stated, To create a new standard takes something that’s not just a little bit different. It takes something that’s really new, and captures people’s imaginations. Macintosh meets that standard.
Through the second half of the 1980s, the company built market share only to see it dissipate in the 1990s as the personal computer market shifted towards IBM PC compatible machines running MS-DOS and Microsoft Windows.

The Top Best Selling Cell Phones in the World of All...

Why we Celebrate Maha Shivratri? Know about Significance, Importance and Fasting...