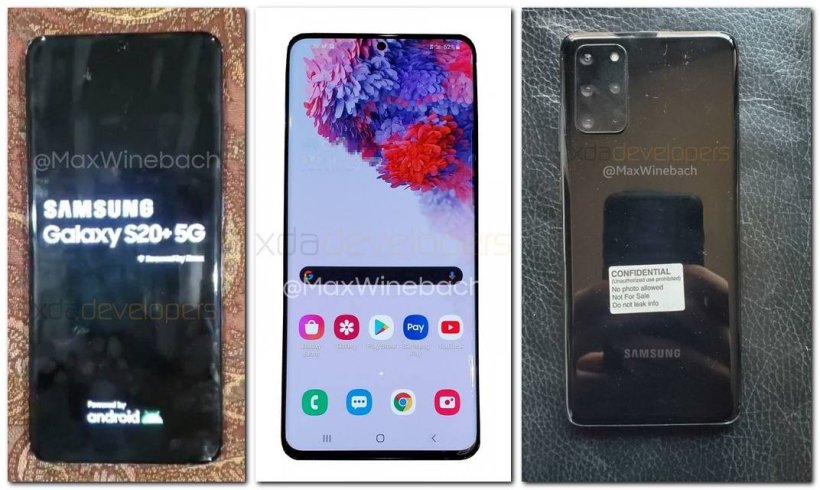 The leaked images come courtesy of XDA Developers, who claim that the leaked images were sent to them by a source who wishes to remain anonymous. The images reveal the design of the phone in its entirety.

The leaked images show a total of four cameras, a flash, and what looks like a microphone hole. On the right side of the phone, there’s a volume rocker and a power button. There is no Bixby button unlike in the earlier S10 series.

As for the front of the device, there are very small bezels on it with the Infinity-O display appearing to be less curved than we’ve seen on the previous version of the phone. The XDA Developers report states that the phone’s display feels almost flat almost similar to the Pixel 2 XL.

The suggestion is that Samsung has opted for 2.5D glass instead of their usual curved glass. The phone does, however, come with a hole punch that is centered and smaller than the Galaxy Note 10. Just like the Galaxy S10 and Galaxy Note 10, the Galaxy S20+ comes with a pre-installed screen protector.

The leak also confirms that the line-up will be indeed called the S20, and the phone that’s been leaked will be the mid-tier phone, with the upper-end one being called S20 Ultra this year. The S20+ will be slightly larger than the regular Galaxy S20 but will lack the camera technology present in the higher-end Galaxy S20 Ultra.

While there is no confirmation yet, rumours say that the new phones will come with a new 12-megapixel 1.8m main image sensor which will sit alongside an ultra-wide, telephoto, and likely macro lens.

As for the other specs, there are a number of rumours, but one thing we know for sure is that the S20 series will pack the Qualcomm Snapdragon 865 mobile platform on the US variants of the device, while the global variants will come with Samsung’s own Exynos chipsets.