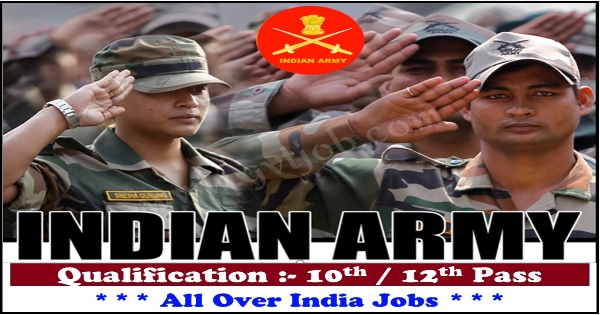 The one organization that stays in the forefront when it comes to serving the nation, both in wartime and in peace, is the Indian Army. The Indian Army, with its impressive performance, is the fourth largest standing army in the world with over 1,362,500 active troops and 2,100,000 reserve troops. Each year over a lakh candidates apply for GD (General Duty) and thousands for entry into commissioned ranks. 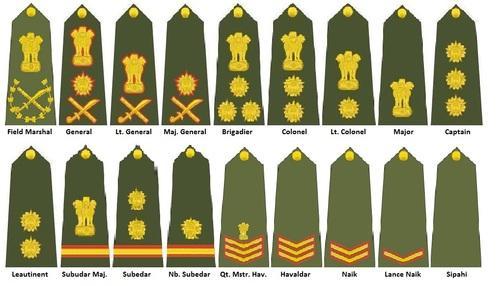 Insignia – National emblem over a crossed baton and saber in a lotus blossom wreathThe Field Marshal rank is the highest rank in the Indian Army. It is a ceremonial or wartime rank and Field Marshal Sam Manekshaw and Field Marshal KM Cariappa have been the only two officers to be elevated to the rank of Field Marshal.

Insignia – National emblem over a five-pointed star, both over a crossed baton and saber

Apart from the honorary rank of Field Marshal, this is the highest rank held by an Army officer. It is only the Chief of Army Staff (COAS) who holds this rank.

Retirement – After 3 years as COAS or at the age of 62, whichever is earlier

Lieutenant generals are appointed only by selection (after 36 years of commissioned service) and may hold the position of a Vice Chief of Army Staff or Army Commanders.

Major Generals are promoted by selection (after 32 years of commissioned service).

Brigadiers are promoted by selection (after 25 years of commissioned service)

Rank achieved on commissioning into Indian Army as an Officer

Retirement – After 34 years service or at the age of 54, whichever is earlier

Retirement – After 30 years service or at the age of 52, whichever is earlier

Insignia – One gold star with stripe

Retirement – After 28 years service or at the age of 52, whichever is earlier

Retirement – After 26 years service or at the age of 49, whichever is earlier

Retirement – After 24 years service or at the age of 49, whichever is earlier

Retirement – After 22 years service or at the age of 48, whichever is earlier

The Sepoys identify themselves according to the Corps that they serve in. For example, a sepoy from Signals will identify him as Signalman, from Infantry as RIfleman and from the Armoured Corps as Gunner.

Educational Qualification: Pass in SSLC or Matric with 45 percent marks in aggregate and 33 percent in each subject.

Candidates must be free from all communicable diseases, infections and cardiovascular diseases, eye and ENT impairment.

After finding the advertisement on the internet or television or Employment News, candidates will need to apply by filling in a form. Select candidates will be asked to appear for a physical fitness test. Those who are shortlisted will be sent in for medical tests and again those deemed eligible will be administered a written test (GK, Math, and Computer awareness)

Candidates may appear for UPSC Exam after passing Class XII. Shortlisted candidates will be asked to appear for a 5 day Services Selection Board (SSB) Interview which includes physical tests. Medical tests will also be administered. Cadets passing out will be offered a choice of service (Army, Navy, Air Force). After about three of training here the cadets are sent to Indian Military Academy, Dehradun, for a period of 1 year before commissioning.

Candidates may appear for the CDS Entrance Exam conducted by UPSC in final year of their graduation or if they possess a graduate degree. After clearing the SSB and Medical tests they are inducted into the Indian Military Academy, Dehradun, to train for 18 months before commissioning.

Candidates in the pre-final year of Engineering may apply through the UES. Shortlisted candidates will then be detailed for training at IMA, Dehradun, for a period of one year. On completion of the course the officers will be granted one year ante-date for seniority, promotion, and increments.

Candidates who have passed Post Graduate Degree MA/M.Sc/M.Com/MCA/MBA (in subjects as per Notification) with first or second division marks are eligible to apply. After 12 months of training candidates are granted permanent commission.

Candidates having passed 10+2 exams with 70 percent marks in Physics, Chemistry, and Mathematics may apply depending on the cut-off announced in the notification. After SSB interview the eligible cadets are sent to OTA, Gaya, for basic military training and technical training.

The Army also offers Short Service Commission (SSC) for men and women for a period of 10 or 14 years.

The SSC entry may be for any of the categories – Technical, Non-Technical, JAG, or NCC entry.