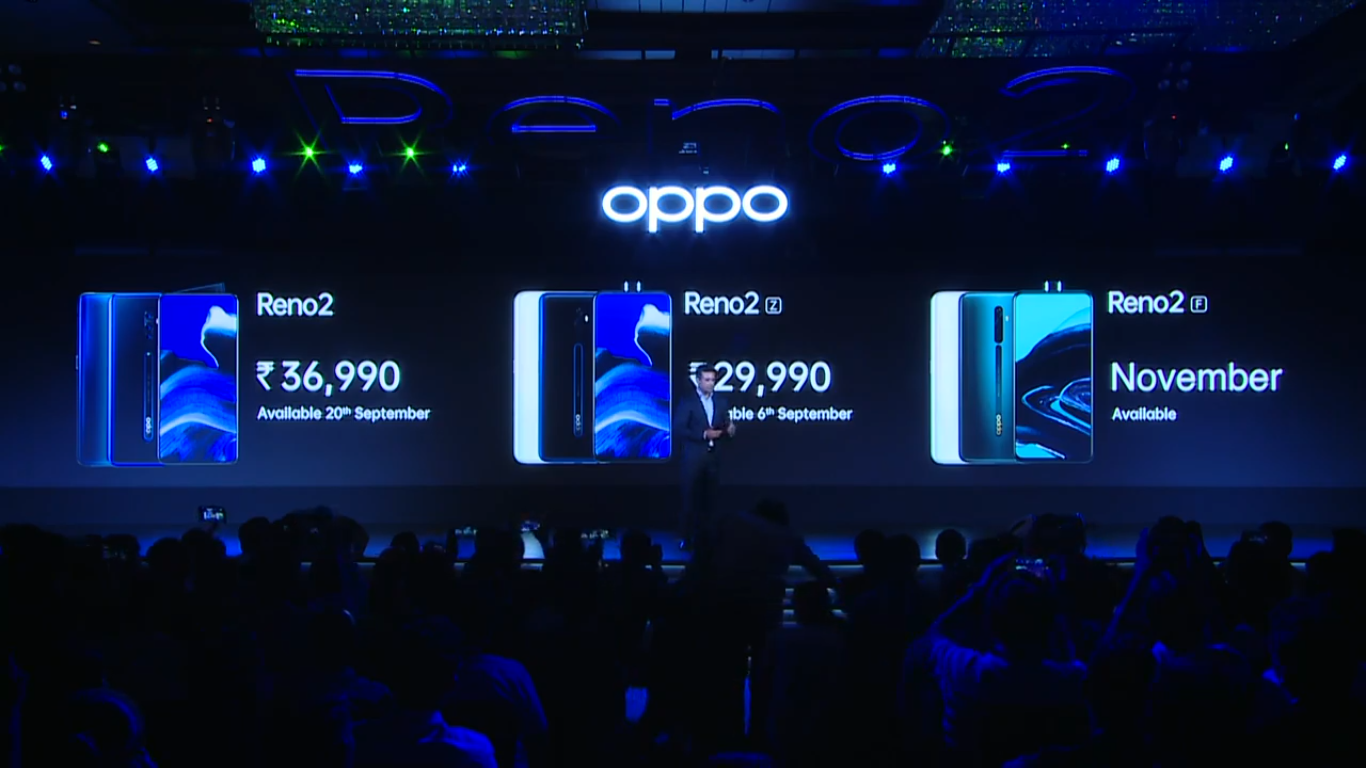 Oppo Reno 2 series launch event on Wednesday started with Sumit Walia, Vice President, Product & Marketing, OPPO India, on the stage who began by talking about the company’s history and its various innovations. He revealed that the company has invested over Rs. 2,200 crores in its Greater Noida facility and it plans to make India a global export hub. Walia noted that Oppo’s Greater Noida manufacturing facility produces over 50 million smartphones annually.
Walia also revealed that Oppo has over 60,000 sales points across the country with over 250 retail outlets. Oppo has achieved a 41 percent growth year-over-year in the country, Walia added.

He then moved to the launch of the day – Oppo Reno 2 series. The company has partnered with Facebook for the smartphone lineup. Walia invited Facebook’s Sandeep Bhushan on the stage to talk about the partnership. Bhushan talked about how sharing is at the centre of the modern smartphone experience and how influencers are using Instagram for the same.

The phone also includes an Ultra Night Mode to help with low-light photography, a portrait mode, and a macro mode. Among the video recording enhancements, Oppo has added Ultra Steady mode with optical as well as electronic image stabilisation. Reno 2 will offer 5x hybrid zoom during the video recording mode as well.

According to Abraham, the Oppo Reno 2 uses a 3D curved Gorilla Glass on the back and features rounded corners. It will be offered in Ocean Blue and Luminous Black colours. On the front, the phone packs a 6.55-inch dynamic AMOLED screen with full-HD+ resolution, and a screen-to-body ratio of 93.1 percent with a 6th Generation Corning Gorilla Glass on top. There is an in-display fingerprint sensor on board as well.

Reno 2 keeps the Shark-fin selfie camera from its predecessor and includes a 16-megapixel front shooter. The phone is powered by octa-core Qualcomm Snapdragon 730G SoC, paired with 8GB of RAM and 256GB of onboard storage. For making the gaming experience on the Reno 2 better, Oppo has also included features like TouchBoost, FrameBoost, and GameBoost.

Oppo will be offering the Reno 2Z in Sky White, Luminous Black, and Polar Light colours and the Reno 2F will be sold in just Sky White and Lake Green colours.

In addition to the Oppo Reno 2 series phones, the company has also unveiled the Enco Q1 neckband headphones. It will be sold at Rs. 7,990(112$).