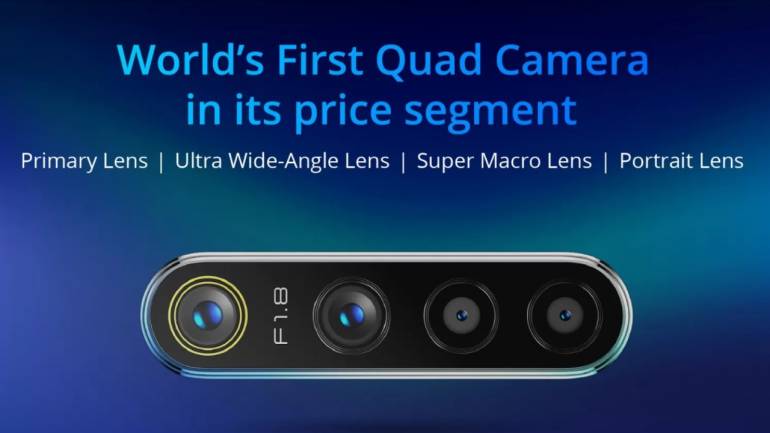 Realme 5-series is now official in India. The company announced the Realme 5 and Realme 5 Pro at an event in New Delhi on Tuesday along with a brand new pair of Realme Buds 2 earphones. The Realme 5 and Realme 5 Pro are the company’s first set of quad camera phones to offer users more ways to capture photos. In addition to sporting four rear cameras, the Realme 5 phones also tout new crystal designs, Minidrop displays, large batteries and new Snapdragon processors, among other things.

Both Realme 5 and Realme 5 Pro come with a new ‘Crystal design’ as the company likes to call. The 3D curved glossy plastic rear panels come with a new diamond-cut design with triangular pattern that is slightly different from what past Realme phones offer. The Realme 5 comes in two new colours – Crystal Blue and Crystal Purple with gradient hues. The Realme 5 Pro will be available in Crystal Green and Crystal Blue colours. The phones also come with splash-resistant designs.

The Realme 5 Pro sports a 6.3-inch FHD+ (2340×1080) Minidrop display with 450 nits brightness and Gorilla Glass 3 protection. It is powered by a 2.3GHz Snapdragon 712 chipset based on a 10nm process. This is paired with up to 8GB of RAM and 128GB of internal storage. The phone gets a triple card slot that can support two nano SIM cards and a microSD card (up to 256GB).

The Realme 5’s quad camera system is slightly different from the Pro model in that it gets a 12-megapixel f/1.8 primary camera instead of a 48MP sensor. The other three cameras remain the same i.e an 8-megapixel ultra wide-angle camera and two 2-megapixel sensors where one is for macros and the other for portraits. The rear camera also supports Nightscape, Chroma Boost and HDR modes. Up front, the phone gets a 13-megapixel selfie camera with HDR and AI beautification.

The Realme 5 sports a 6.5-inch HD+ (720×1600) Minidrop display with Gorilla Glass 3 protection. The curved, droplet notch is smaller and flatter compared to past dewdrop displays. The Realme 5 gets a rear-mounted fingerprint sensor and face unlock. It measures 164.4×75.6×9.3 mm and weighs 198 grams.

It is powered by a new 2.0Ghz octa-core Snapdragon 665 AIE chipset based on a 11nm process. This is the first phone in India to be powered by the SD665 SoC. The chipset will also be seen inside the Mi A3 that will launch in India on Wednesday, August 21. The Realme 5 comes with up to 4GB of RAM and 128GB of internal storage with support for microSD card (up to 256GB) in a triple card slot.

Another big highlight of the Realme 5 is that it packs a large 5,000mAh battery, which is a first for a Realme phone. This massive capacity combined with hardware and software optimisations should allow the Realme 5 to last really long on a single charge. Realm e5 also runs on Android Pie-based Color OS 6.